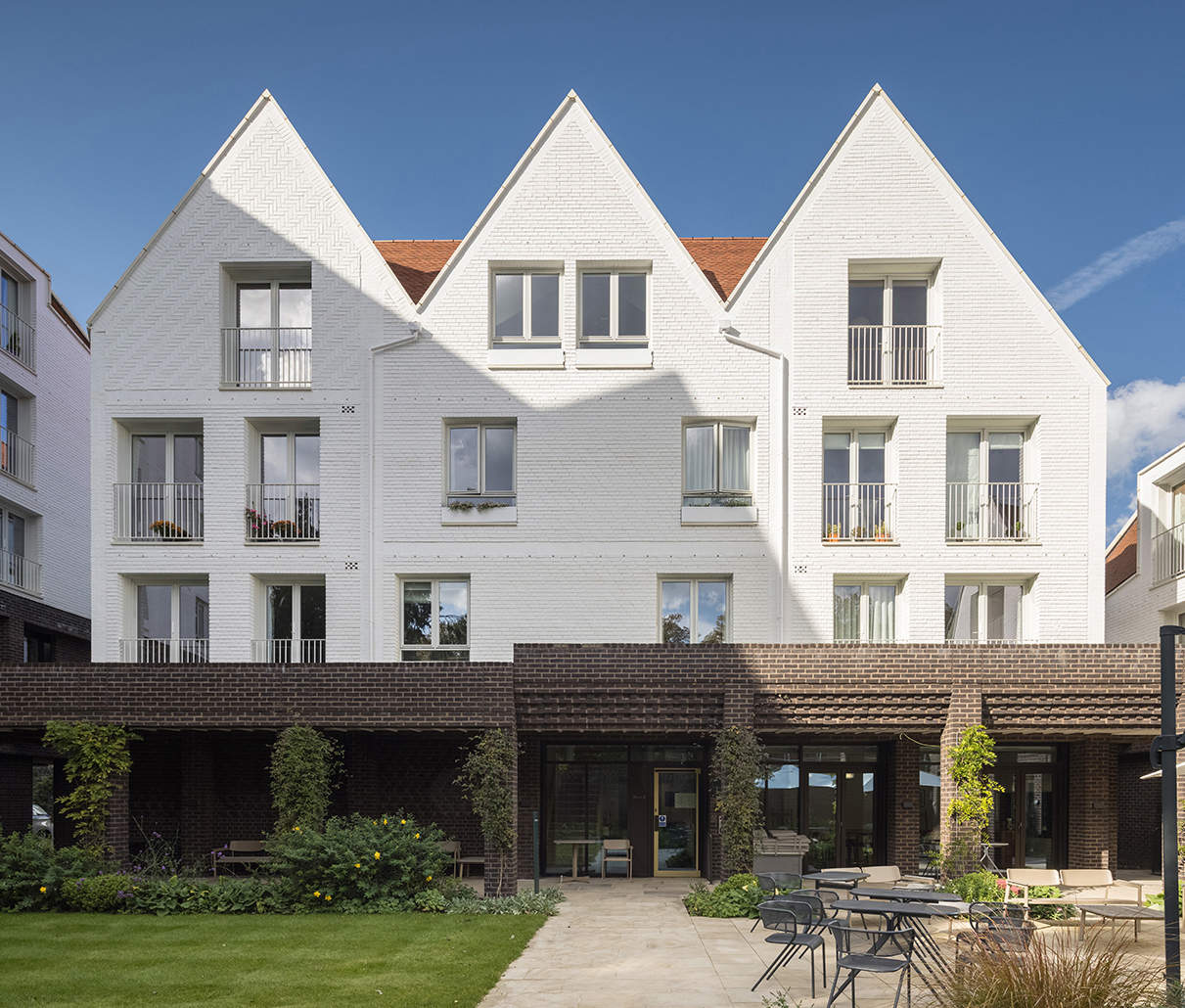 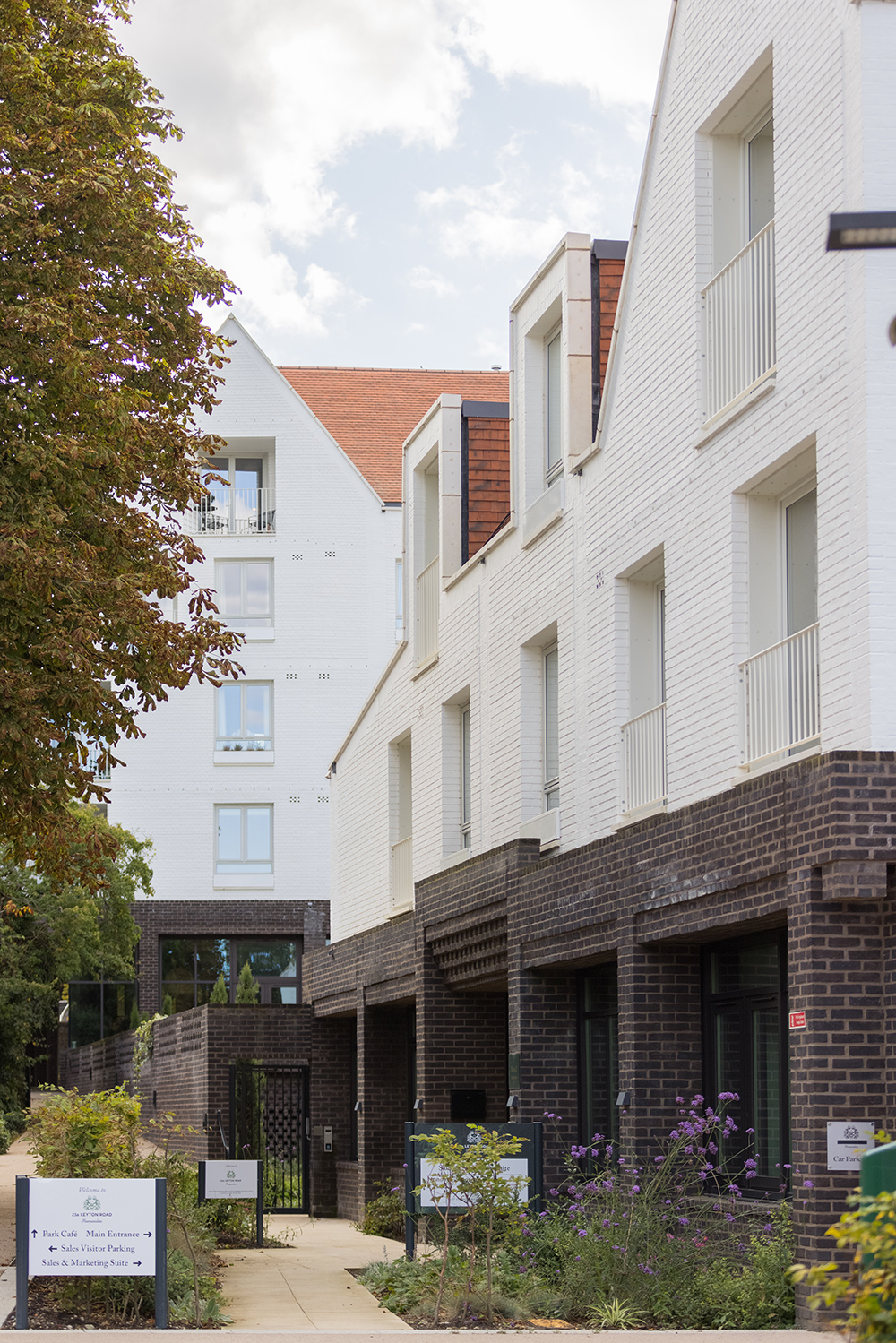 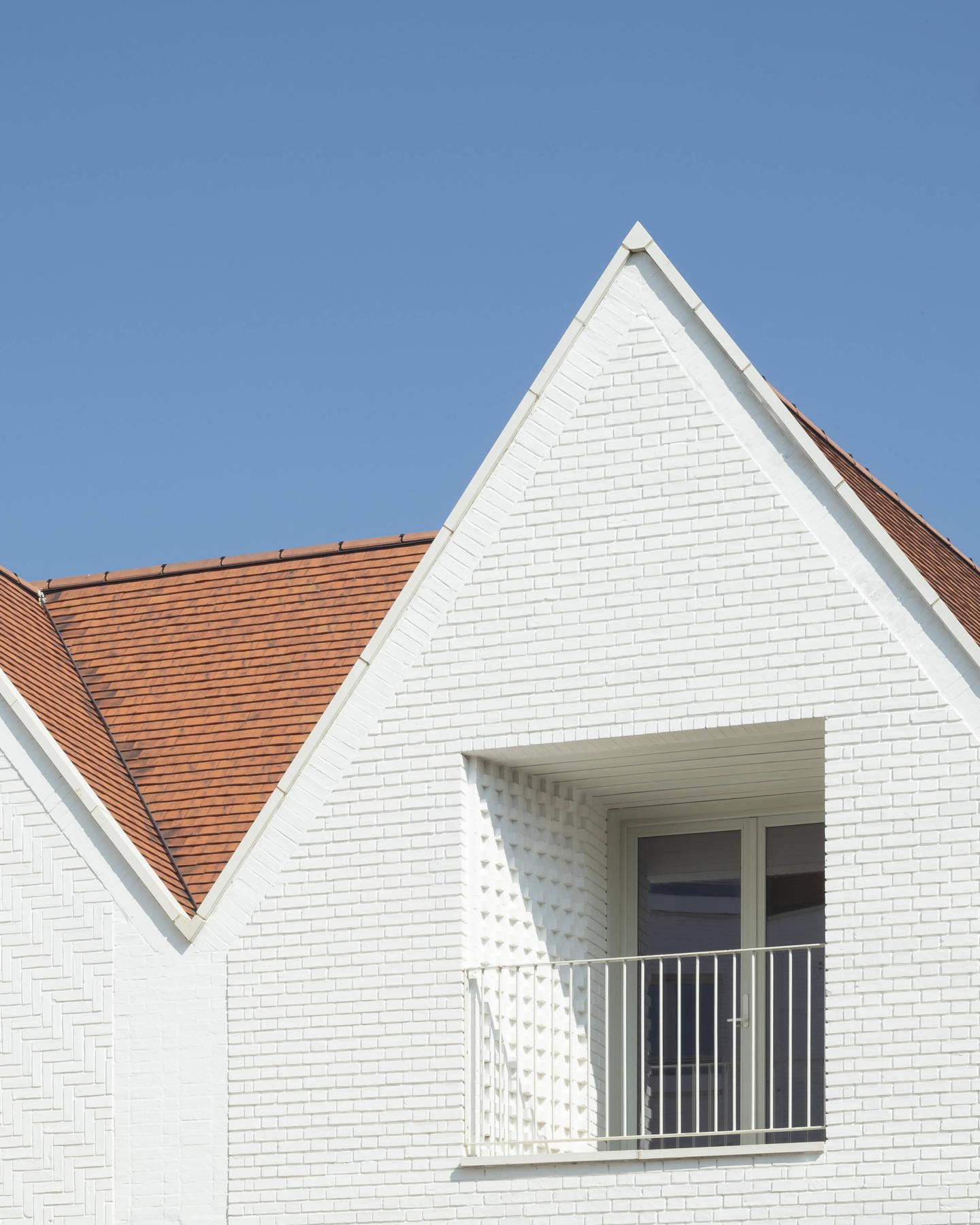 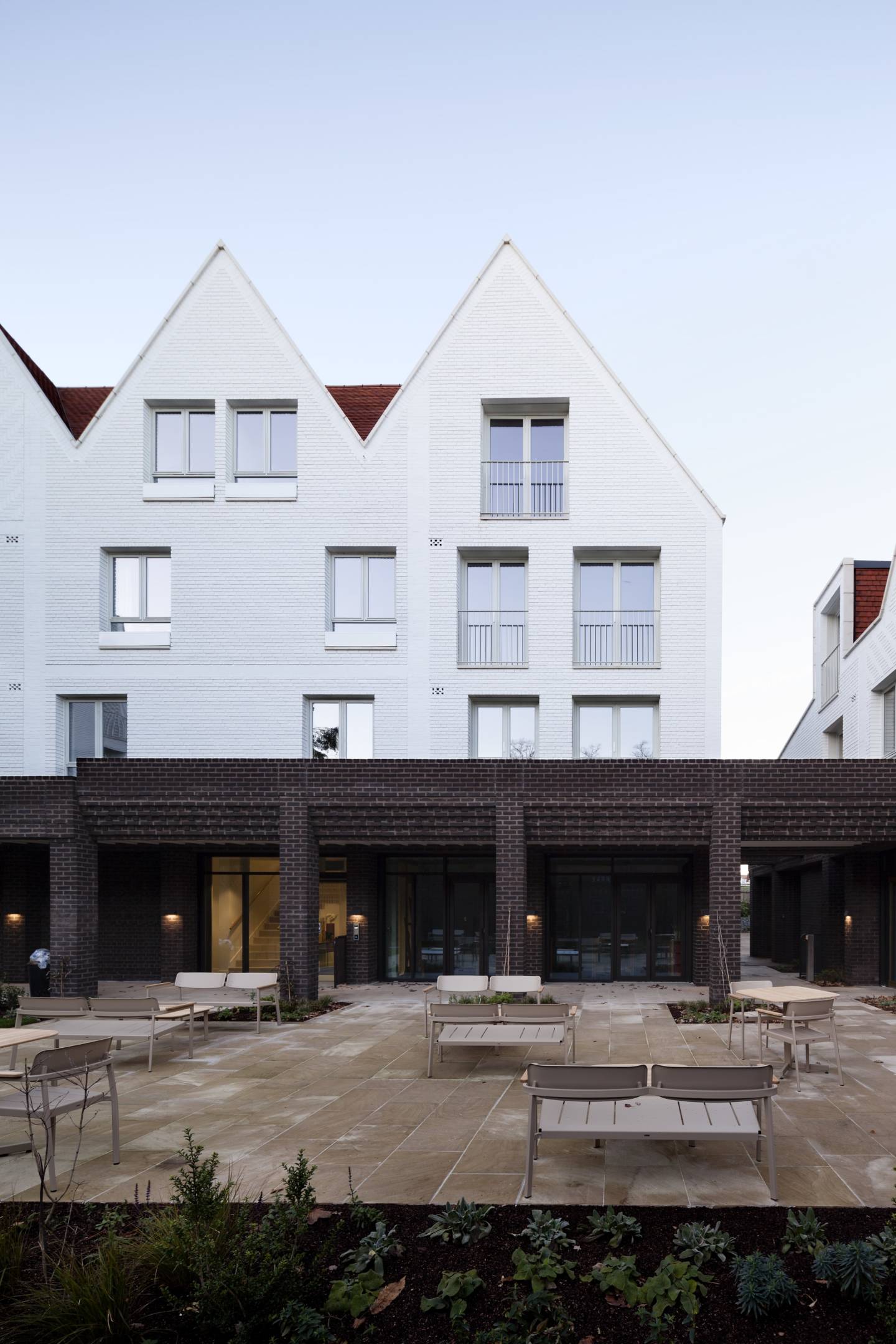 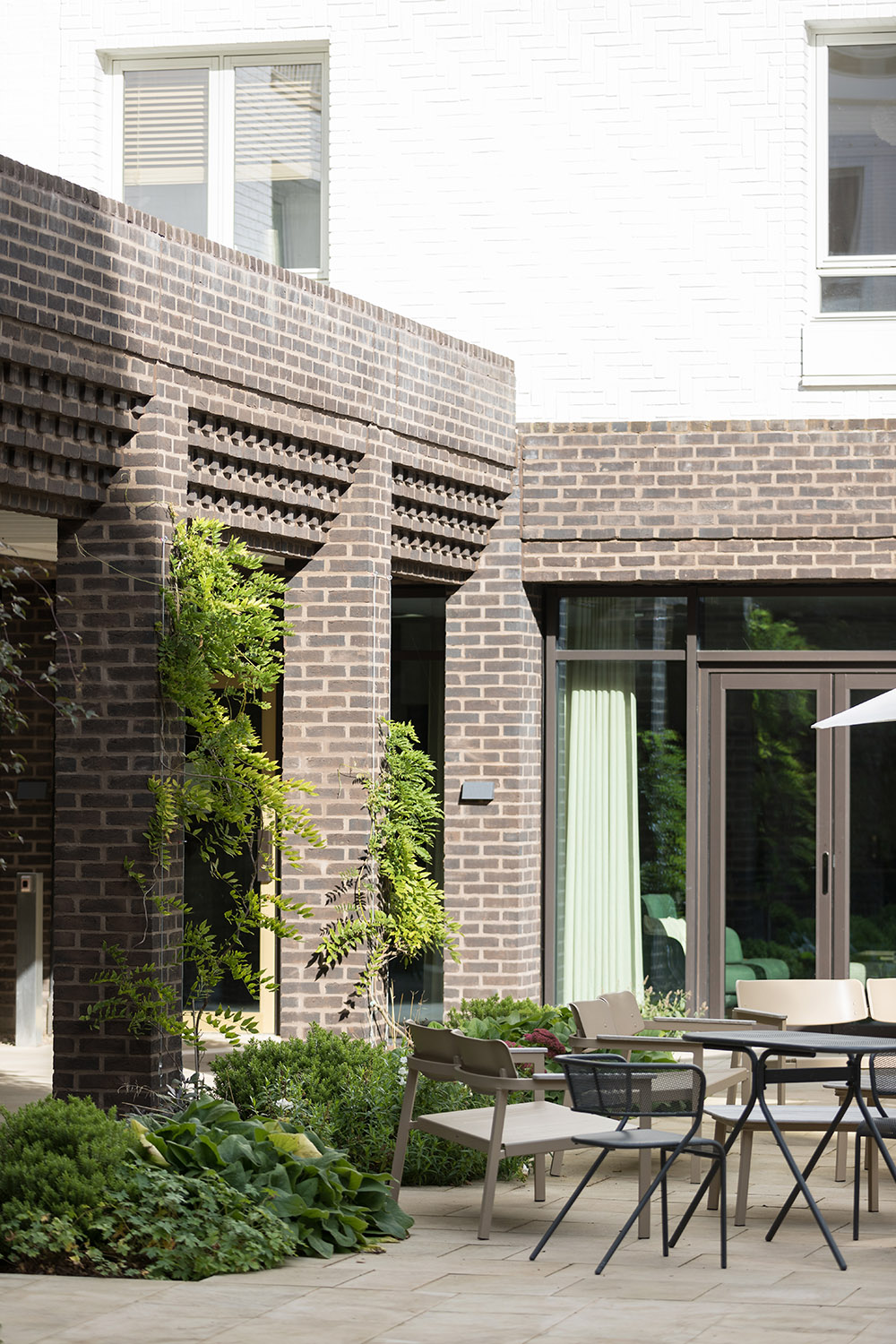 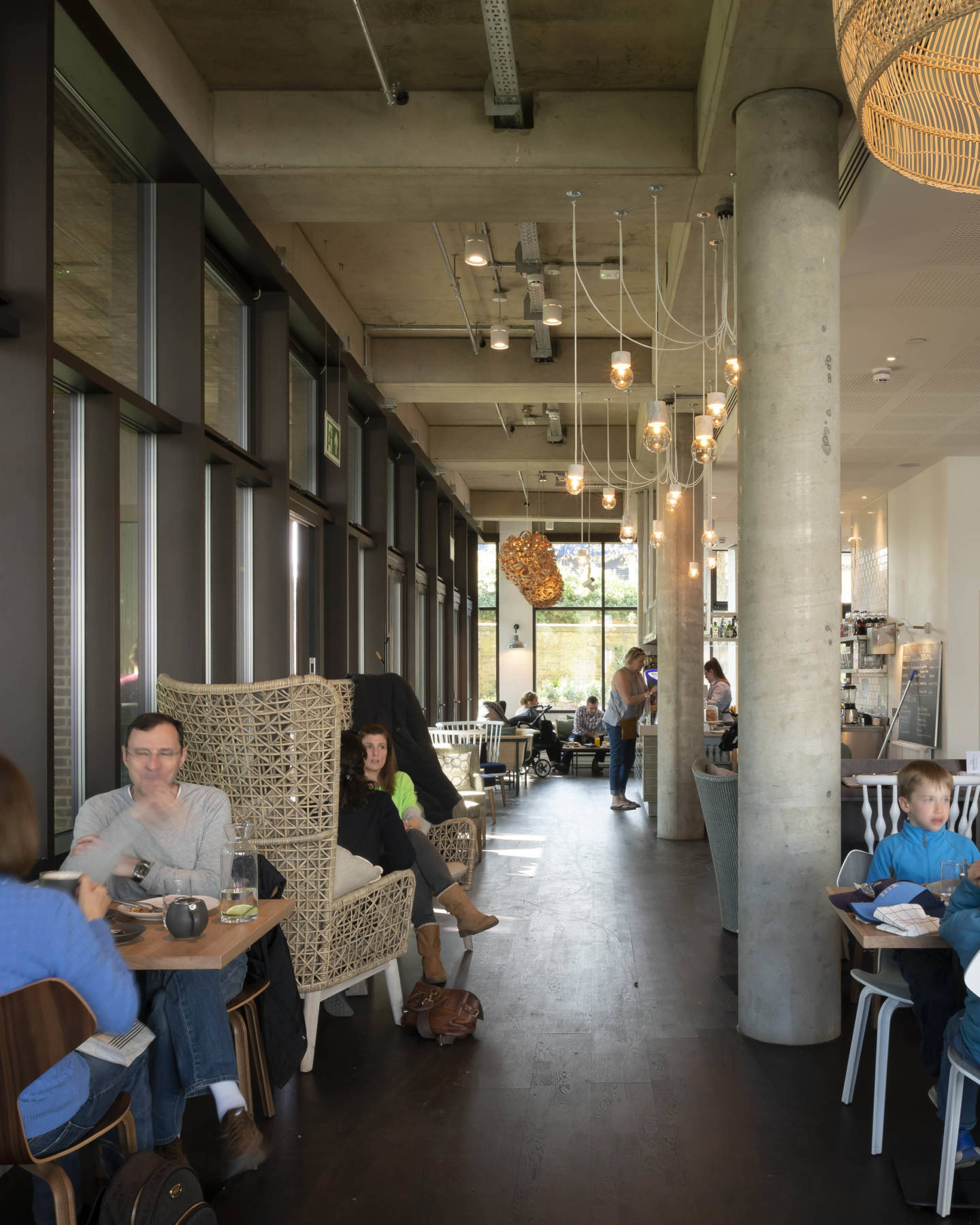 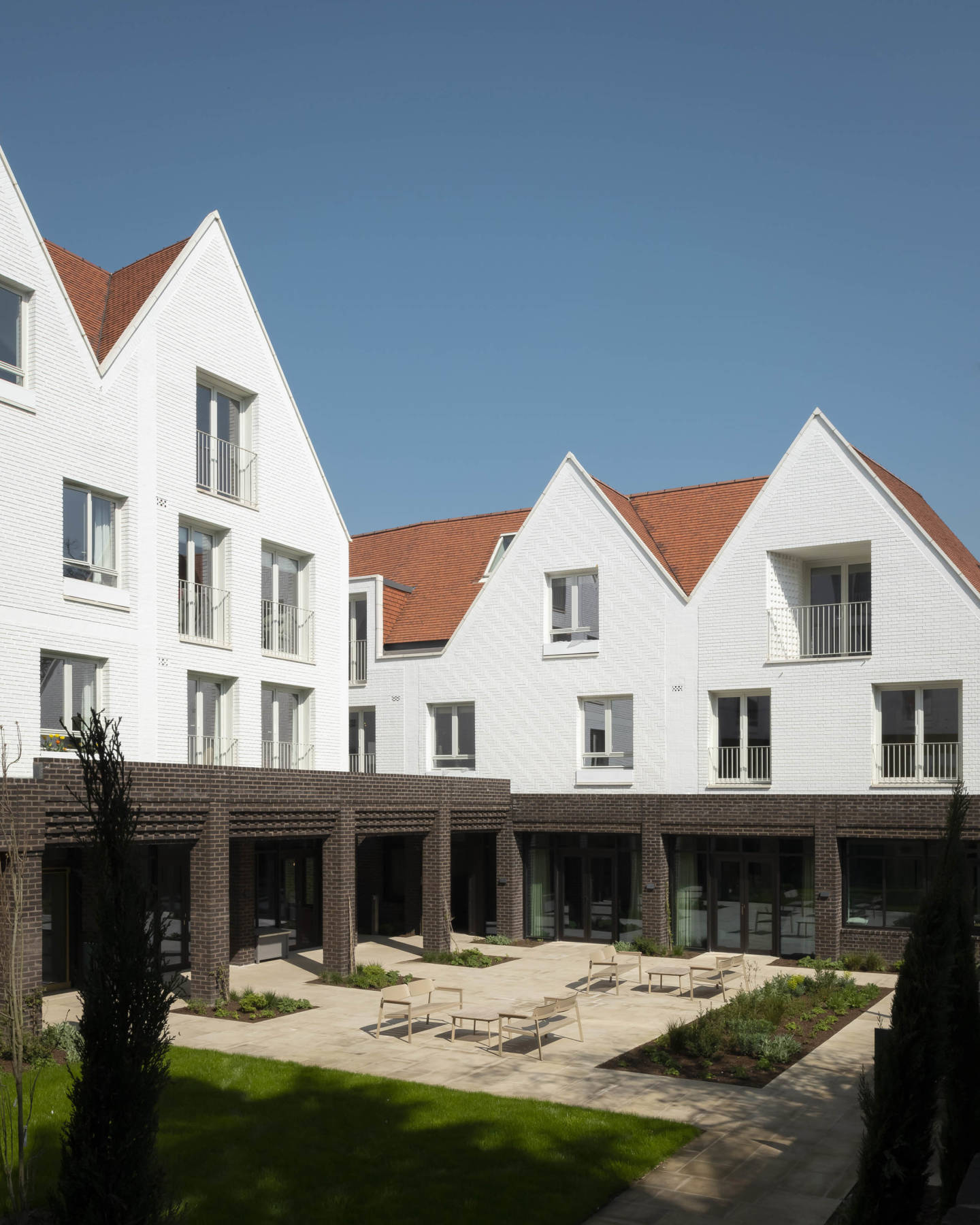 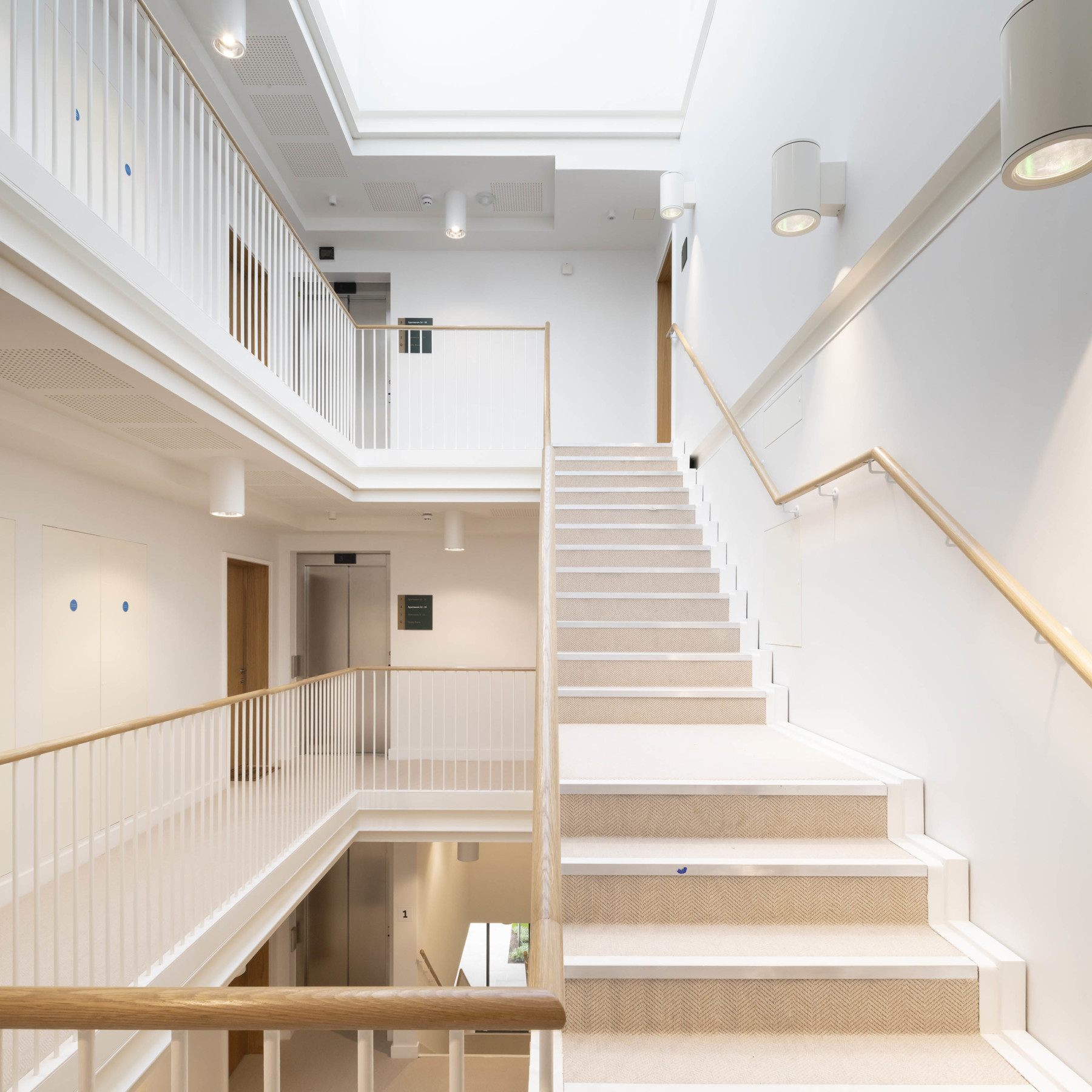 Located in the market town of Harpenden, Hertfordshire, this later-living development responds to the sensitive conservation area and open parkland. The scheme consists of 38 generous apartments at a density of 84 dwellings per hectare which represents a density increase of 170%, three times the previously consented proposals for the site. 23a Leyton Road occupies a key site in the town, providing much-needed later living together with communal facilities, a community café and landscaped courtyards – all within the beautiful setting of Rothamsted Park.

Achieving the required density on site relied on the introduction of an innovative villa typology. The villa typically consists of four dual aspect apartments around a communal atrium. This allows the villas to be located relatively close to one another but staggered to define a diverse range of external spaces with clear thresholds between them. In colder months residents can enjoy the green spaces from the comfort of the lobby spaces or overlook the garden from their living spaces, all of which will help with good cognitive function and reduce the effects of dementia.

“This proposal amounts to a significant public gain, which alongside the high level of architecture, the scheme’s design qualities, and the scale of other public benefits described, would demonstrably and significantly outweigh the less than substantial harm caused to the significance of the conservation area.”

Entering from Leyton Road, users are drawn through a generously proportioned garden square which leads onto a communal lounge and cafeteria in the largest building. Loneliness is recognised as a major contributor to health problems in older people and so this area is vital for encouraging social activity and chance interactions.

The layout across the site is centred on legibility with all cores centrally located to ensure easy wayfinding, supporting a sense of independence among residents. Natural light and ventilation are maximised, with top-lit circulation areas, dual-aspect apartments, and minimal internal corridors within the homes. The design is ‘care ready’ so that new and emerging technologies, such as telecare and community equipment, can be readily installed. Similarly, the homes can easily be adapted for future needs – such as allowing a care worker or family member to stay when required.

As well as our consideration of the end user’s wellbeing, we wanted our design to enhance and complement the wider setting through the sensitive use of materials and forms. Leyton Road is characterised by gable ends and protruding dormer windows that animate the eaves line. The villas we’ve designed borrow heavily from the rich Arts & Crafts heritage of the town with highly articulated gable elevations and playful eaves lines.

Three years on from completion we have heard positive feedback from residents and the wider community, the extra-care facility shares many of its communal functions with the wider town, providing vital social infrastructure. We were able to maximise the community benefit from a site that had been derelict for 14 years despite several attempts to reutilise it.